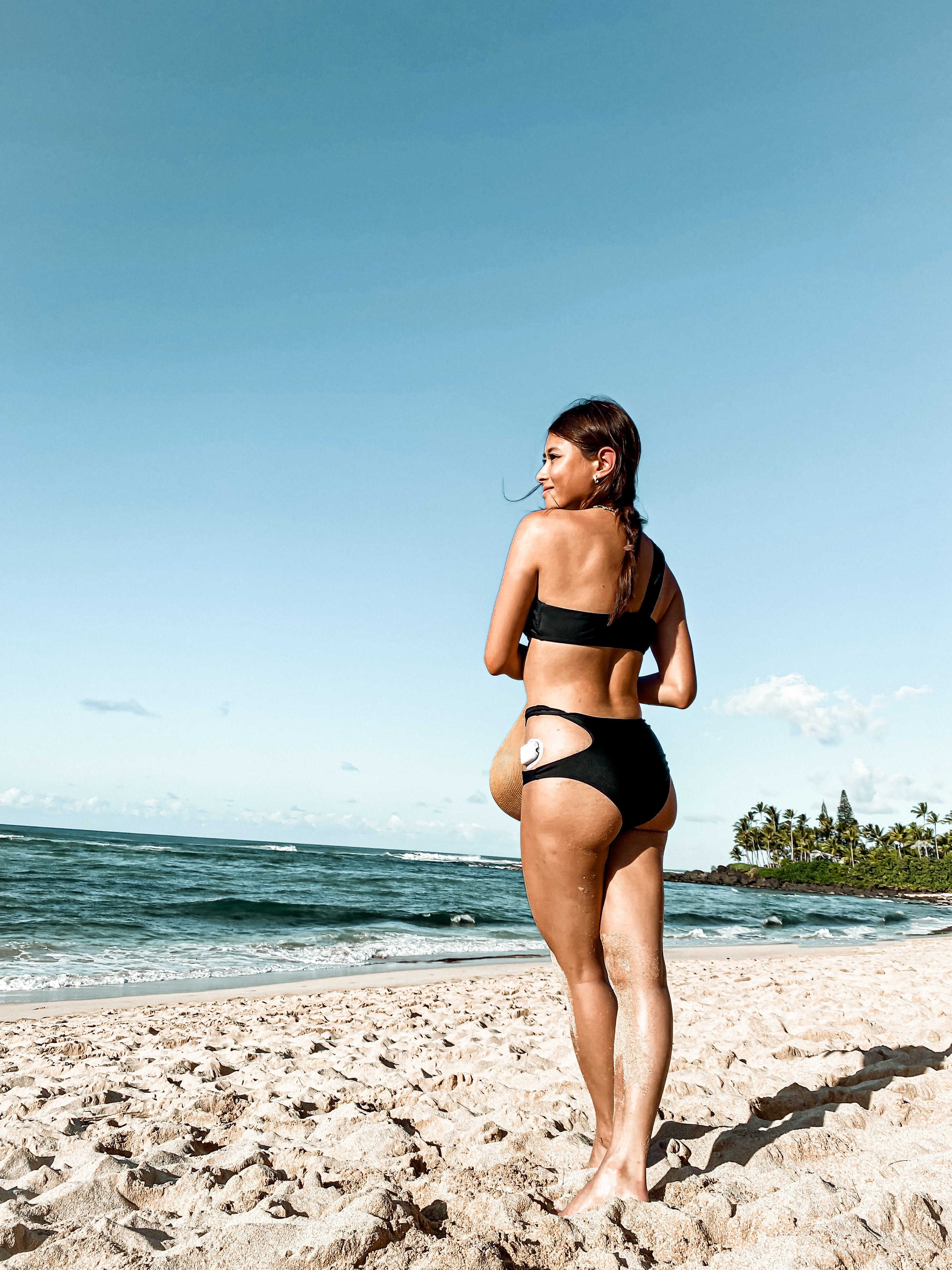 When Amy Hsieh reflects on life before being diagnosed with type 1 diabetes, one thing stands out.

Ok, so maybe not sushi exactly, but what it symbolized for her as a T1D. For Hsieh — a 28-year-old T1D digital creator with12,000 followers on Instagram and 30,000-plus likes on TikTok — ordering sushi at a restaurant led to an influx of distress.

What if my dinner injection gave me more insulin than I need?

What if I’m not full and want to order more sushi, but I didn’t bring enough insulin to cover it?

This was Hsieh’s reality for her first three years with diabetes, opting for multiple daily insulin injections (MDI) instead of the convenience of an insulin pump. Now, going into her sixth month as an Omnipod DASH® user, she’s realizing just how easy and flexible something as simple as ordering sushi at a restaurant can be.

It ties to what Hsieh considers to be an overlooked element of life as a T1D.

“The biggest issue with diabetics is the mental, not the physical,” says the Orange County, California, resident. “The roller coaster of highs and lows, the constant monitoring. For a lot of diabetics, it’s really overwhelming.”

It was 2018, and Hsieh was on break from grad school at the University of Southern California (USC) when she visited family at home in Taiwan.

Soon, she felt ill and was taken to a local hospital.

What Hsieh didn’t know? She had gone into Diabetic ketoacidosis (DKA). At 25, Hsieh was diagnosed with type 1 diabetes.

She was confused. She knew about type 2 diabetes, but not much about type 1. So, Hsieh did what any 25-year-old would do: she started researching it online.

“It was a lot to take in,” Hsieh remembers.

Among those changes: Multiple fingersticks each day to test her blood glucose levels, and multiple daily insulin injections of short-acting and long-acting insulin. After her diagnosis, Hsieh opted to stay in Taiwan for six months to recover and adjust to her new reality.

The research continued when she got back to the United States. Soon, she learned about the Dexcom G6, a continuous glucose monitor (CGM) that would all-but-eliminate the need for fingersticks*.

Four months later, she was sold on its benefits and officially switched from fingersticks to the CGM.

“It was such a relief,” Hsieh remembers. “I was so tired of doing all the finger pricking and I really restricted myself on a lot of food I was eating. I wouldn’t try food that requires more work or more calculations.”

Still, there was one piece of technology she was unsure of.

Facing her concerns head on

While Hsieh stresses the mental toll diabetes can take on a person, she fully admits there are physical challenges as well. It was actually two physical concerns that kept her from trying an insulin pump for so long.

“I just didn’t like the tubes,” Hsieh jokes. “And did I really want another device on my body?”

Hsieh had heard about Omnipod DASH and its tubeless insulin management system. But after two and a half years of MDI, did she really want to try something new? She didn’t really mind the four injections she was giving herself on a normal day.

But in October 2021, Hsieh decided to give the Pod a shot.

The first few days, like anything, took some adjusting. She had to get used to having a basal rate, and naturally she overestimated how much insulin she needed each day, leading to more low blood sugars than usual. Still, once she got the hang of it, the lows started becoming less frequent — nothing a little gulp of maple syrup from the refrigerator couldn’t handle.

And thanks to an hour-long training session with Insulet staff, Hsieh had Omnipod DASH figured out in a week’s time.

Related: Ready to ditch the daily injections or send your pump packing? Sign up for a free 30-day trial** of the Omnipod DASH.

Hsieh also figured out a site rotation that worked for her and her lifestyle — placing the pump on her back and legs.

With her two concerns alleviated, all that was left was taking advantage of the flexibility she had back in her life.

If her blood sugar creeps up during a work video conference? No need to run to grab insulin and a needle. A simple bolus on her PDM will do the trick.

Out with friends and need to bolus for her meal? A discreet bolus on her PDM and she’s back in the conversation.

Traveling and eating on an irregular schedule? No need to carry around needles and chilled insulin to account for snacking.

And, of course, the sushi. That can be handled, too.

“You become stronger,” she explains. “Physically and mentally.”

“But then,” Hsieh says, “it turned into a real-world project.”

MyDiabuddies helps connect people with diabetes to one another for mutual support, whether you’re looking for tips on proper bolusing before exercising, need to vent on the phone after a difficult doctor’s visit, or discussing the stress and anxiety that managing diabetes can cause.

As Hsieh explains, “It’s like Bumble BFF for diabetics.”

“Through our research,” Hsieh continues, “we found that a lot of the most useful information diabetics receive is passed along by diabetics themselves.”

Social media is merely another outlet for her to connect with fellow T1Ds. Hsieh has found her Instagram and TikTok communities to be really engaged, direct messaging her to share how relatable they find her content and seeking out her advice.

Another way she’s helping? Passing along pump pros and cons to people with diabetes who, like she was, are hesitant to switch from MDI.

What does Hsieh have to say about Omnipod DASH?

“It’s definitely made my life a lot easier,” she says. “More than I thought it would.”

†The Pod has a waterproof IP28 rating for up to 25 feet for 60 minutes. The Omnipod 5 Controller and DASH PDM are not waterproof.
*If your glucose alerts and readings from Dexcom G6 do not match your symptoms or expectations, use a blood glucose meter to make diabetes treatment decisions.
**To be eligible for 30 Days of Freedom Trial Program, you must complete and sign Program Enrollment and Personal Information Forms and may be required to submit additional documentation. Patients must have been prescribed Omnipod DASH for an FDA-approved indication. For new Pod Therapy patients coming from multiple daily injections or tubed pumps only. Free Omnipod DASH trial program is not available to beneficiaries of Medicare, Medicaid or other federal health care programs, or to members of certain commercial health plans. You agree not to sell, trade, return for credit or seek insurance reimbursement for the PDM or free Pods. After the 30-day trial, your out-of-pocket cost for Pods will depend on your insurance coverage. Other restrictions may apply. Cancel at any time. 30 Days of Freedom Trial Program terms and conditions are subject to change.