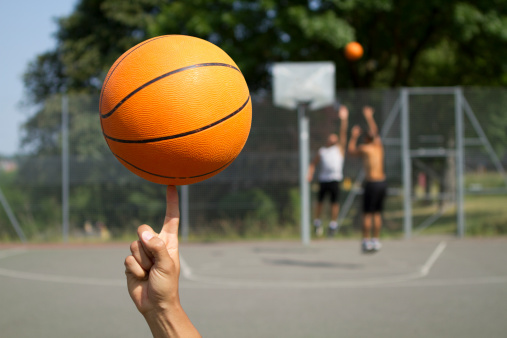 Basketball.  It’s been a passion of mine ever since I was a kid.  Watching the pros, playing the game with friends, even following fantasy team stats.

Basketball was also the impetus for giving the Omnipod a try a few years ago.  You see, when I play ball, I tend to “sacrifice my body” by setting picks, driving into the lane, diving for loose balls, and going after rebounds amongst the trees (guys much taller and bigger than me).  I wore an assortment of traditional tubed insulin pumps for almost 20 years, and there was no way I could wear the pump while playing.  It would take too much of a beating, and would always come unclipped at the worst possible moments.  Unfortunately, I also tend to play for hours at a time, so I was forced to disconnect for extended periods of time.  The result: blood sugars that rose steadily while playing, climaxing with super-high readings an hour or two after the post-game reconnection, based on my CGM and verified with a fingerstick.

So the Pod seemed like an ideal solution.  I could wear the Pod while playing and not have to deal with the rising blood sugars due to disconnecting from my traditional tubed pump.  I even figured out the perfect spot for wearing them: on my upper butt right below the waistband of my shorts.  But then a new problem jumped onto the court:  I started going low while playing.  I mean really low.  50s, 40s, even 30s.  Then it hit me:  Exercising aerobically while receiving a continuous flow of basal insulin (rather than no basal at all, as was the case when I was disconnecting), was causing my blood sugar to drift downward.  I see this happen to my patients all the time, but didn’t think to make the same adjustments I recommend to them.   So here are a few principles and strategies I began to implement regarding basal insulin and exercise:

For short-term workouts (less than an hour), it really makes very little difference for me whether I receive basal insulin or not.  The basal insulin I received up to the start of the workout will continue to work for the next three to four hours.  If I want to prevent hypoglycemia, I either reduce the bolus given at the meal prior to the workout (if the exercise takes place within 2 hours after eating), or take some rapid-acting carbs 15-20 minutes pre-exercise.

For long-term workouts (more than an hour), basal reductions can keep the blood sugar from dropping as rapidly as usual.  Most people start out with a 50% reduction and see how that works.  Many find that intense workouts require a greater reduction (as much as 80%).  However, the reduction will need to be made a little ahead of time, since changes in basal delivery take an hour or two to start influencing the blood sugar level.   Ideally, I start the temporary basal reduction 60-90 minutes pre-workout, and continue until about half an hour before the end of the workout.  This allows my body’s normal level of basal insulin to resume soon after my workout is completed.

For prolonged workouts, it can be hazardous to receive no insulin at all.  Disconnecting or suspending the pump for more than 90 minutes can cause the level of insulin in the body to drop dangerously low.  This, in turn, can cause the blood sugar to rise sharply (as the liver dumps large amounts of sugar into the bloodstream) – particularly towards the end of the workout and immediately afterwards.  In extreme cases, the body may shut down glucose metabolism entirely, and ketones will develop.  Ketones are acids produced from fat metabolism.  Combining large amounts of ketones with dehydration (caused by high blood sugar and exercise) can lead to a life-threatening condition known as diabetic ketoacidosis (DKA).

Everybody reacts to exercise differently, so it takes trial and error and working with your HCP to get it down. But for me, the answer was simple.  Because I was disconnecting from my tubed pump for 2+ hours at a time while playing basketball, my basal insulin was wearing off and my blood sugars were climbing.  When I switched to the Pod, I went low because the Pod continued to deliver my normal amount of basal insulin before and throughout the game.  This week, I set a temporary basal reduction about an hour before playing, and my sugars looked great.  And I felt great, and played better than usual (which isn’t saying much).

But hey, every little bit helps!