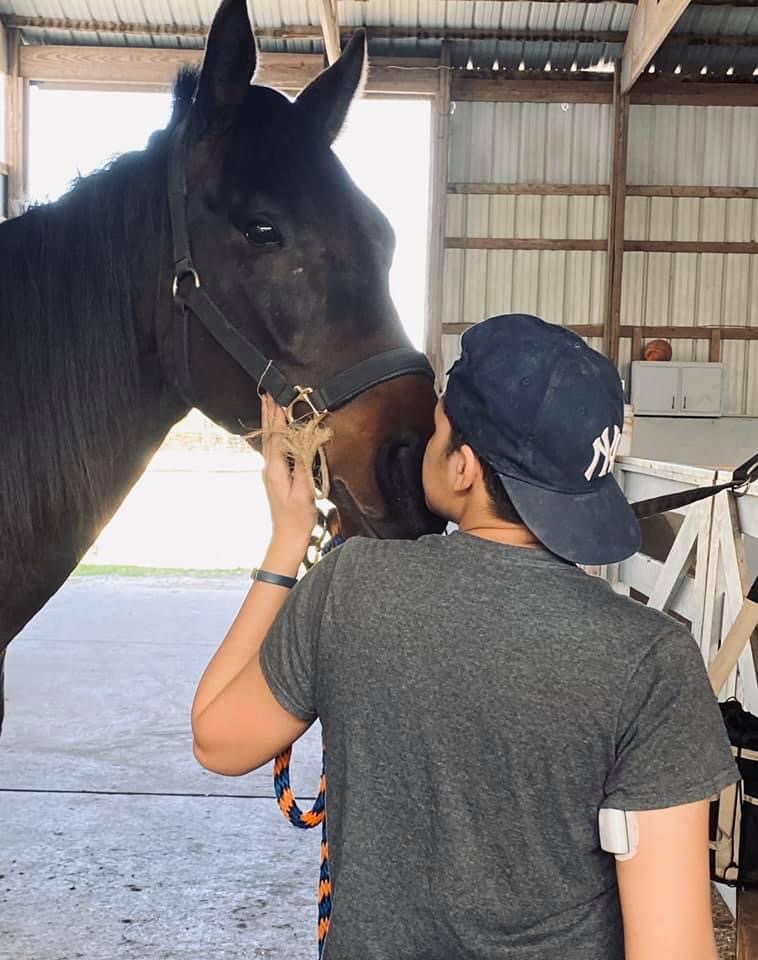 If you watched Guillermo "Alex" Trancoso gracefully riding his thoroughbred horse, Arrow, you'd never know he had endured years of debilitating pain, multiple major surgeries, recurring hospitalizations, and endless months in the ICU. While everyone on the planet faces challenges, Alex has faced far more than his share at 16 years old, one of which is surgically-induced diabetes.

Born with autism, a connective tissue disorder, and epilepsy, Alex had already overcome (on a daily basis) more obstacles before his teens than many might face in their entire life. Even going to school tested Alex's resilience as he faced bullies and missed more than two years of school due to constant hospitalizations.

Despite it all, Alex is now training and competing in the sport of dressage horse riding -- but we'll get to that in a moment.

While he likely doesn't realize it himself, Alex Trancoso may very well have been born with superhero strength considering the challenges he's conquered at only 16 years old.

The 26th Pediatric Patient to Undergo a TPIAT

Testing his resilience further, Alex began having "bouts of pancreatitis" in his early teens, explained his mother, Carolyn Trancoso. Very rare in children, getting a firm diagnosis was difficult and finding the right treatment plan proved even harder.

Over the course of a year of various treatment attempts at the Cincinnati Children's Hospital's "Pancreas Care Center," Alex was clearly suffering. Throughout that year, Alex endured extreme, debilitating pain in his abdomen with each flare-up of pancreatitis, constantly in and out of the hospital, and eventually the inability to eat.

"Initially, he lost over 20 pounds before considering a feeding tube," explained his mother. At first, doctors dismissed his inability to eat as a result of severe anxiety, but even after receiving a feeding tube, digesting food was extremely painful.

"He would literally sit in his room in the dark and vomit 10 to 20 times a day," she added.

The only logical treatment option left was a surgery that had only been performed on 25 children before him at Cincinnati Children's Hospital. A "total pancreatectomy with islet autotransplantation" or "TPIAT" is a major, 16-hour surgery that involves surgically removing the pancreas, spleen, gallbladder, appendix, part of the small intestines, reconstructing the gastro-intestinal tract, and finally, transplanting insulin-producing islet cells to the liver. This critical detail of transplanting islet cells is an effort to prevent surgically-induced diabetes.

Alex was the 26th pediatric patient at Cincinnati Children's to undergo this surgery.

Recovering from a TPIAT is no walk in the park, explained Carolyn, a leader in advocating for Alex's needs and overall health.

Alex relied on a feeding tube for his nutrition, daily chemotherapy to control and maintain blood cells, round-the-clock medications, pain specialists, and of course, an insulin pump to provide supplemental insulin while the transplanted islet cells do their best to provide insulin, too.

While there are no words to describe the stress and trauma any child would face undergoing this procedure and recovery, every step of the way was a testament to Alex's strength, courage, and resilience as a teenager with autism.

6 Months in and out of the ICU & Severe Needle Phobia

As if he hadn't proved his resilience firmly enough already, Alex faced one of the potential complications of a TPIAT: bowel obstruction.

"He went in for emergency surgery, and spent 6 months in and out of the intensive care unit recovering from these complications."

Fortunately, one source of support provided to Alex was his faithful service dog, Ling -- a rescued Chinese Crested, which would inevitably help him through one of his next challenges: needles.

"During blood draws, he would need to be sedated," explained his mother. "He needed so much sedation that it made the doctors very nervous because normal amounts of sedatives had no effect on him."

The Cincinnati Children's hospital did everything in their power to help reduce the emotional and physical trauma of blood draws and other necessary needle interactions, creating two different response teams for any treatment involving a needle.

But the inevitable consequence of diabetes from his TPIAT was something Alex spent months preparing for prior to the surgery.

To prick his finger, Alex's extreme fear of needles was a fierce obstacle.

"He went to psychological therapy 5 days a week for 6 months, just to build his way to holding onto the lancet device," described his mother.

"The Omnipod has literally been a lifesaver for Alex," added Carolyn. "Because it provides his insulin delivery in a painless and fearless capacity without having to ever handle a needle."

At first, Alex needed lidocaine and a great deal of time before every new Pod was administered because of his needle phobia. Instead of letting his phobia win, he worked arduously to overcome this invisible obstacle, finding the most help in meditation and self-talk before and during every necessary needle interaction.

Knowing needles were going to be part of his life for the unforeseen future, Alex now administers new Pods completely on his own.

"Now, I just tell myself to get it over with," said Alex.

The question of how long Alex would need exogenous insulin isn't an easy one to answer.

While every patient who undergoes a TPIAT expects to need "exogenous insulin" via pump or syringe for a period of time, only time can tell how well those transplanted islet cells will work as the body recovers from surgery.

"It depends on how healthy the islet cells are," explained Carolyn. "The amount of cells they are able to get, and actually transplant, and then how well those cells survive and thrive in the liver is different in every patient."

"At times, Alex has been able to go off his insulin pump completely, or for a few months he's only needed insulin for carbohydrates," explained his mother. "And sometimes he suddenly needs a lot of insulin. Or sometimes he only needs a basal rate but no insulin for meals. It changes."

While insulin-dependent diabetes is challenging enough on its own, Alex's form of surgery comes with that added confusion of dramatic fluctuations in his insulin needs, making the need for patient-doctor communication that much more critical.

"It's been a breeze to operate and navigate," added Carolyn. "Allowing us to communicate with out-of-state specialists and to focus on what is most important as a young aspiring athlete-Alex and his horse!"

Transitioning back to school wasn't easy for Alex after recovering fully from his surgery. He'd missed two years of education along with two years of establishing friendships when social interactions were already challenging as a teenager with autism.

That's when Alex found his love of horses and dressage at a friend of the family's farm.

"Dressage is a type of riding where you don't use your hands at all," explained Alex. "You control the horse with your body, trying to get the horse to dance."

The most notable aspect of Alex's quickly evolving dressage skills was his relationship with his horse, Arrow.

"Arrow is a thoroughbred that had just come off the racetrack and retired on this farm," explained Carolyn, who grew up riding horses at the same farm. "Normally, you would never pair a young thoroughbred with a child of any age, especially one with significant medical issues. Everyone was shocked by Alex's ability to ride Arrow as a total beginner."

Arrow is known for being a bit testy or "naughty" with other riders, even those with decades of riding experience.

"Not once has Arrow been testy with Alex," added his mother. At one point, when Arrow had scrapes and cuts on his legs from playing too closely to the fence, the only person he would let touch him or even come near him was Alex.

With regular lessons, Alex went from a newbie rider to a true dressage dancer.

"At first, sitting up straight was hard and my stomach muscles would get really sore," said Alex, who adjusts his insulin doses around the physical work of riding using his Omnipod® System.

"I'm really good at a lot of things in dressage now. Every single lesson, I get better and better."

When well-known Olympic rider Steffen Peters heard about the teenager riding dressage with a retired racing thoroughbred, he was in awe, too. Considering the expense of a sport like dressage, Peters offered to help Alex, and provided the initial funds for the cost of his training with renowned trainer, Linda Fritsch.

And still to this day, Peters keeps up with Alex and his progress on a monthly basis.

Today, Alex is working towards becoming a fierce competitor, eager to see where he and Arrow can go as they dance together. Eventually, Alex and Arrow will progress to a show-level performance, memorizing patterns while judges assess the connection between you and your horse, and your dance.

Having watched her son endure so much physical and emotional pain, his success in dressage has become a bright light in his day-to-day life with weekly lessons.

"We really danced today," Alex told his mother after a recent lesson. Thanks to his courage, tenacity, and resilience, we look forward to watching Alex and Arrow dance for years to come.

© 2020 Insulet Corporation. All Rights Reserved.
The author was compensated for this blog.