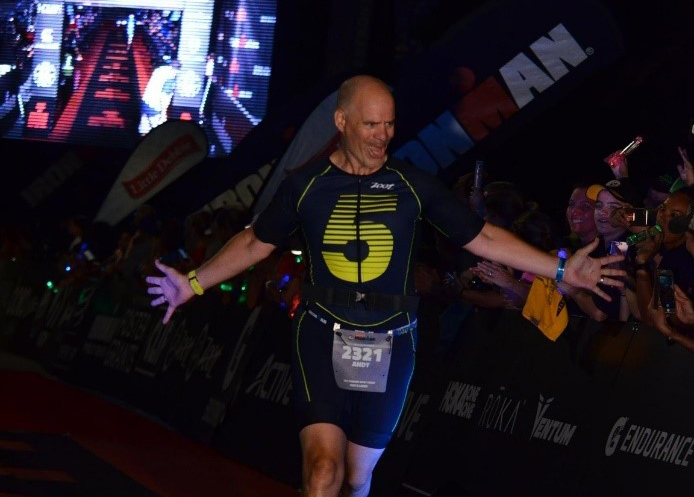 Here at Insulet, we are proud of our many employees who are also Podders™. Andrew Holder, or “Iron Andy” as he is known throughout the diabetes community, is a Territory Manager in Philadelphia, Pennsylvania and a user of the Omnipod® Insulin Management System. This means that he is a Salesperson who works regularly with health care professionals and patients to provide information about the Omnipod® system.

Ever since his diagnosis 15 years ago, Andy made diabetes his platform for inspiring others living with diabetes.

“Things happen,” Andy explains. “You can either curl up in a ball, or you can do something extraordinary.”

As a former Wall Street financial professional with no family history of diabetes, Andy’s diagnosis at age 35 was a shock. But it was also a catalyst to changing careers and pushing himself to new limits as an endurance athlete.

“I had it in my head that I was going to find a way to make a living, and make a difference, by telling my story and building awareness for type 1 diabetes.”

Andy set out to complete an Ironman triathlon, which consists of a 2.4-mile swim, a 112-mile bike and a 26.2-mile run. This extreme sport is one of the most physically challenging competitions in the world, and completing it while managing type 1 diabetes is even more difficult.

“I wanted to make some noise,” said Andy, who also started the Iron Andy Foundation to create awareness and opportunities for children living with type 1 diabetes. His efforts caught the attention of some big name organizations, like JDRF, AADE, ADA and various media outlets, and before long he was speaking regularly about diabetes and Ironman training.

In 2006, after being invited by JDRF as a keynote speaker at one of their black-tie fundraiser events, he was offered the professional role of national spokesperson for Amerisource Bergin, a large pharmaceutical wholesaler and a large of sponsor of JDRF. Between 2006 and 2012, Andy completed eight full-length Ironman triathlons with type 1 diabetes, including Lake Placid, Florida, Coeur d'Alene (3 times), Louisville, Wisconsin, and New York City, while speaking about his training and living with diabetes. His dream had come true – he was making a living as a diabetes professional while building awareness and inspiring others to live well with diabetes.

In 2012, his role with Amerisource Bergin came to an end, but he had other opportunities to work in the diabetes industry, since he had made so many connections over the years speaking at various events. He continued to speak and create online content for various businesses and organizations devoted to the diabetes community, and eventually transitioned to a sales role. Then three and a half years ago, Andy joined Insulet as a Territory Manager.

Ironman took a back seat during this time of transition, but in 2018, the community he had so inspired convinced Andy to return to the sport. In September, he completed Ironman Chattanooga, after being away from the sport for five years.

“To be out on the course again was amazing,” said Andy, who added that blood sugar management had become so much easier in the five years since he last competed. The event in Chattanooga was his first Ironman on the Omnipod® System and the Dexcom Continuous Glucose Monitoring System.

The Omnipod® System also made it much easier for Andy to manage his blood sugar during the triathlon. When he was using a tubed pump in prior years, he was forced to disconnect during the swim portion, which is always the first leg of the competition. Andy explained that disconnecting his pump for several hours leading up to and during the swim, his blood sugar was more difficult to control throughout the day. With Omnipod®, he didn’t have to worry about the effects of disconnecting from his insulin pump, since the Pod is waterproof* and wearable. His blood sugar was easier to manage before, during, and after the swim as a result.

Now 50 years old, Andy plans to complete more Ironman triathlons and enjoys sharing his experiences with Omnipod® and diabetes with others, including families who come to their clinic’s pump class to learn about the different options available.

“Working for Insulet, I get to show people on a daily basis that I’ve taken this diagnosis and created a way to help people with diabetes.”

Andy adds that his personal experience with at least four other insulin pumps gives him credibility when showing others the Omnipod® System.

“It certainly helps that I’m passionate about Omnipod® and how it’s changed my life and made things easier,” Andy said. “It really is the best solution.”