Phoenix Rising: How Switching to An Insulin Pump Changed My Life 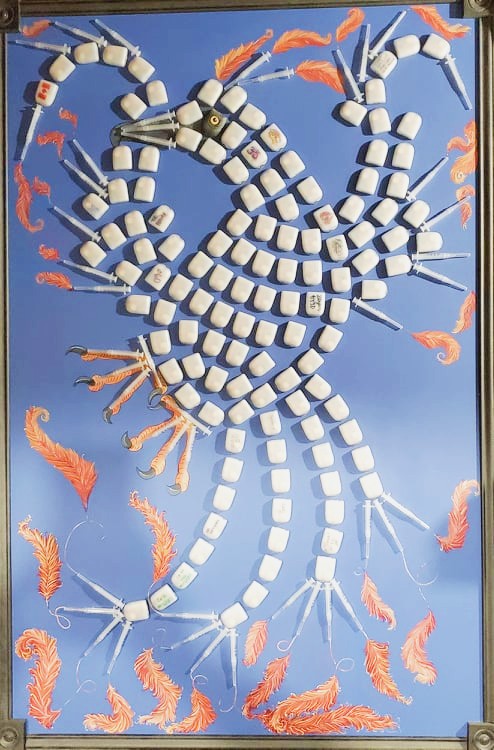 Living with Type 1 Diabetes makes for a complicated relationship within yourself. Yet it can find you emerging daily with a strength and resilience you did not know you had.

My own relationship was challenged by a two-decade struggle with needle phobia. As someone who must administer insulin to survive, that phobia made my necessary daily injections cumbersome and sometimes impossible.

Navigating those four to six daily injections was like engaging in a wrestling match with myself. There were instances that were easier than others and occasionally there were those ending in a full-blown panic attack. The kind that made me a sweaty, lightheaded, nauseated heap on the bathroom floor just twenty minutes before dinner.

While on multiple daily injections (MDI) my diabetes management was subpar. I neglected correction doses and skipped meal doses because I simply could not muster the strength necessary to administer the injections.

Change is scary. But change can be good.

Something shifted in 2018, and with the encouragement of my family, I initiated switching from MDI to insulin pump therapy. In October I received the call, my pump start date would be November 26th.

What a way to wrap up Diabetes Awareness Month!

I was going to start wearing my pancreas on the outside.

And stop the mental torture of injecting myself.

Wearing a medical device is an intimate relationship between the device and the person wearing it. Being able to choose technology that works for you is paramount. For me, that meant an insulin pump without tubes.

At the clinic, my pump educator greeted us (my husband accompanied me). The three of us sat down, then tackled the last of the learning: we discussed dosing, basal rates, ratios for bolusing. She gently reminded me it will take my body time to adjust.

Then the pivotal moment arrived: out came a Pod, a vial of insulin, and Otis (the name I gave my Personal Diabetes Manager or PDM). As I drew the insulin from the vial, using the syringe packed neatly beside the Pod, I started to panic…subsequently a wave of calm washed over me.

This syringe was going to be inserted into the Pod, not me.

Collectively we cheered when we heard the two beeps and waited for the Pod to prime. As it primed, I prepped the site of my first official Pod placement and with the educator’s guidance I remove the backing before adhering it to my body*. Then, with the push of a button, a few clicks followed by a snap: we check, and the cannula has successfully inserted.

I could hardly believe it! After living with T1D for nearly twenty years, I walked out of the office wearing my first-ever insulin pump.

I am a collector. Of strange things sometimes. It is the artist in me that whispers: you could use that for something later.

So, it came as no surprise to my family when I started collecting my Pods from that first year of pumping. I knew how instrumental those Pods would be. Little things can often make the biggest difference.

Every Pod I wore received its number upon deactivation. Some even received decoration (after removal, as the User Guide states that Pods must not be decorated or painted**) to commemorate unique events:

I had no real plan for those discarded Pods, but I knew I did not want to part with them. My life had changed so much. And it was because of them.

Life on an insulin pump was different than I had expected.

The first few weeks felt like a long first date. Otis and I were getting to know each other, feeling each other out as we navigated an unfamiliar dance together. As we memorized steps, we graduated to more complex moves and mastered new skills.

Before I started insulin pump therapy, I hid my diabetes. And I liked it that way. It was easy to push it to the background, to ignore it. I believe my initial aversion to pump therapy (aside from fear) was the idea that diabetes would not just be attached to me but visible to everyone else.

The impact of wearing the Omnipod® System was so profoundly positive for me that neither it being attached to me or visible to others posed an issue.

Otis and I were a great match.

Rise of the phoenix

Most people know of the mythological bird the Phoenix, whether from classic literature or artwork.

While its origins often contested, its symbolism is not. Across cultures the Phoenix represents rebirth and renewal.

For me it is an emblem of a new era.

And that is how I felt after that first year on the Omnipod® System: reborn.

But how was I going to convey that in an art piece using a year’s worth of Pods?

The artistic process is a multiplicity of other processes. It is the combination of planning and creativity peppered with a collaborative balance of craft and execution.

I began by drawing on the wealth of emotions and feelings that year evoked. That reflection culminated in the tracing of a Pod. I wanted to incorporate all of them (as well as the syringes used to fill them) which meant 127 little paper Pods; this piece – whatever it was to be – would be large. Symbolic of how big that year was.

Somewhere in the spring of 2020 all those processes came together to ignite inspiration and set a flame to a new process: like the Phoenix.

I practiced the layout on our dinning room table with all those paper Pods. Then built and painted a wooden canvas; each paper Pod was then positioned and repositioned. Once the template was set, I replaced each paper Pod with one from the box until all 127 were attached.*

The bird was beginning to take shape.

Next, I attached the syringes before setting about bringing the Phoenix to life with the addition of feathers, and other features. Each feather required multiple layers of delicate lines. There were sessions that would find me complete three or more, other days it was barely a brush stroke, and sometimes there were weeks between sessions.

Through that creative process I was able to relive all the memories stored in those Pods. It brought forth a deeper appreciation for how far I had come. Seeing the piece complete was emotional.

It truly is emblematic of that first year.

I do not know what I was expecting to get from transitioning to an insulin pump. I suspect I hoped for freedom, and even accountability.

I was not expecting an injection of life.

But that is exactly what I got.

Insulet has paid a fee to engage Rebecca as a content creator and has an ongoing commercial relationship with Rebecca as a Sponsored Podvocate, however the views expressed in this testimonial are solely those of Rebecca.