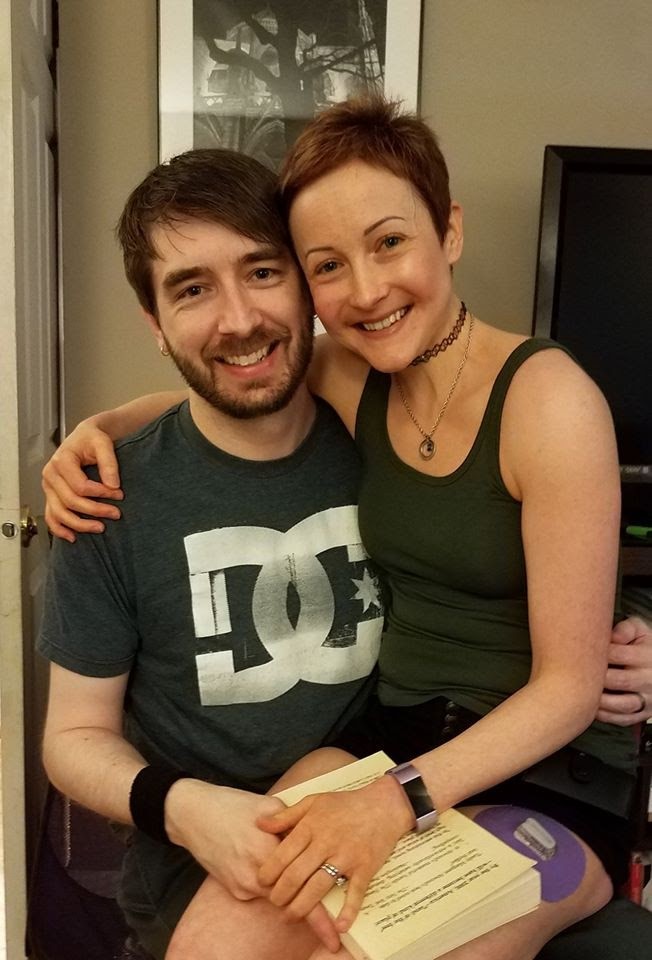 Asha Brown was diagnosed with type 1 diabetes at age 5. Now, nearly 30 years later, she actually faces a handful of chronic health conditions she must manage on an hourly basis to get through her day. Not only are these additional illnesses a great deal of work, they also hugely affect her blood sugars and insulin needs.

Known in the diabetes community as the pioneer of coaching people with type 1 diabetes who struggle with diabulimia, Asha has been fully recovered for over a decade and coaches others struggling with diabulimia through her non-profit organization, We Are Diabetes.

During the 10 years she engaged in diabulimia behavior, Asha withheld insulin in a futile effort to lose weight. Living with blood sugars constantly between 300 to 600 mg/dL meant struggling and damaging every other part of her life and her entire body. A potentially fatal practice, Asha knows those years took their toll on her long-term health.

Now facing a multitude of chronic health conditions, Asha made a very big decision to try using an insulin pump -- the Omnipod DASH® System -- for the first time in her entire life with type 1 diabetes.

Learning the hard way just how complicated health can get

Asha learned the hardest way possible that other hormones in the human body impact not only her daily health but even her ability to walk up a flight of stairs or quickly pop into the grocery store.

For years, in addition to type 1 diabetes, Asha has struggled with excruciating pain and seemingly endless bleeding due to Polycystic Ovarian Syndrome (PCOS). After trying different hormone therapies and begging for a total hysterectomy, she was losing hope.

Most doctors are reluctant to perform a hysterectomy on someone of "child-bearing age." Asha was adamant that she would not pursue pregnancy, knowing all too well the damage her body incurred during a decade of diabulimia.

"I lived with the excruciating pain of ruptured cysts and prolonged bleeding that could last months at a time since the age of 16," explains Asha. "The long-term solutions proposed to me for managing my PCOS were more of a band-aid approach. After exhausting all of the available options suggested to me for over a decade, without any relief, I desperately searched for a surgeon willing to accept my 'high-risk' case and give me the surgery I knew I needed in order to find peace and trust in my own body again."

At last, she found a doctor who could hear her voice and see her pain.

But the price of essentially curing her PCOS came with the added responsibility of managing more critical hormones that the human body is supposed to manage properly on its own.

A Body that Struggles to Produce Insulin...and Testosterone, Estrogen, and Cortisol

While mother nature's version of menopause still leaves a person producing some estrogen and testosterone, Asha's body was no longer producing enough of these critical hormones for daily function.

And then, as if type 1 diabetes and surgically-induced menopause aren't enough, Asha developed Addison's disease .

"Addison's disease is a disorder in which the adrenal glands - which sit on top of the kidneys - do not produce enough of the hormones cortisol and aldosterone," explains the Cleveland Clinic .

Replacing these hormones is no simple task because while you need fluctuating amounts of cortisol throughout the day based on your activity level, it isn't dosed in adjustable amounts throughout the day like we are able to dose our insulin.

Instead, Asha takes a dose of cortisol along with several other steroids several times a day in an effort to meet her body's basic cortisol needs.

For those of us who produce cortisol naturally, we don't realize that simply walking up a flight of stairs and battling the check-out lines at Costco requires a significant spike in cortisol. Asha has to limit and plan any physical activity carefully based on her hormone and steroid regimen.

But it gets more complicated.

"I've had lows that just kept getting lower and lower no matter how much juice I drink," recalls Asha. "When they coincide with an hour when I've used too much cortisol, my blood sugar cannot recover until my cortisol has also recovered. It's very scary! And something I work hard to prevent every single day."

The overall impact of both these conditions on her type 1 diabetes management meant even more variables than the rest of us struggle to juggle! Sudden spikes in her blood sugar from taking her life-saving doses of prednisone, hydrocortisone, testosterone, and estrogen had become a constant struggle -- especially since she was still taking her insulin via multiple-daily-injections.

"With my Addisons and the steroids I have to take, my insulin resistance and insulin sensitivity fluctuate wildly," explains Asha. "Ideally, I would need to slightly adjust my background insulin doses based on my hormone management. Doing this with multiple daily injections really isn't possible."

Despite being extremely meticulous about the timing of every hormone she has to take -- like waking up at 4 a.m. to get her first steroid dose -- the impact of having to manually manage this many hormones that directly affect blood sugar levels was more than she could manage with injections.

Watching her A1c gradually rise was also very frustrating after working so hard to recover from diabulimia and care for herself to prevent further damage from high blood sugars.

"Asking for help has never come naturally for me," adds Asha. "It was one of the reasons I struggled with an eating disorder for over a decade. One of the big life lessons I've received from that difficult time in my life was asking for -- and accepting -- help when I need it. I knew I had done everything I could to manage my diabetes on MDI with these newer hormone challenges. I knew it was time to ask for help."

A creature of habit, Asha decided to try something different after 30 years of managing type 1 diabetes with syringes.

After 30 years of injections, Asha tries the Omnipod®

"I really don't like technology at all, which is ironic because I'm married to an IT genius," laughs Asha. "I don't like learning new technology, it just makes me very anxious."

Knowing an insulin pump would inevitably help her fine-tune her insulin doses around her steroid and hormone regimen, Asha faced her fear of technology and jumped-in with both feet.

"I love the tubeless feature of the Omnipod® -- that's really the biggest appeal for me," she explains. "It's easier to dress with, there isn't a big bulky thing clipped to your jeans all day. It's just the simplest option."

Asha worked closely with her CDE and Omnipod® pump trainer -- Jennifer C. Smith, RD, CDE from Integrated Diabetes Services -- to create precise and dramatic changes in her basal rates to meet the exact schedule of her cortisol, steroid, and other hormone doses.

"Everything became more streamlined when I suddenly had the power to set basal rates that change hour by hour based on my daily steroid and hormone dosing schedule."

"The relationship between cortisol and blood glucose is complicated," explains Asha. "There are days my blood sugar levels hover on the low side due to my cortisol levels tanking. Before the Omnipod®, I would deal with this by walking around my house with a jar of honey and a spoon."

Now, when Asha knows her cortisol levels are too low, she can easily adjust her basal insulin doses on her Pod.

"Also, with fewer blood sugar spikes after steroid or hormone doses during the first few hours of my day, my overall energy has increased and my daily myofascial pain has decreased," adds Asha.

"My A1c was getting too high after struggling to manage diabetes around Addison's and my BSO with daily insulin injections," she explains. "Now it's easier to manage my blood sugars because everything is simply more streamlined."

For many in recovery from diabulimia, an insulin pump can be a daunting thing due to the visibility of your diabetes technology and the overall idea of that constant drip of insulin, but this is something Asha is proud to say she has far overcome.

"In terms of my body image, wearing the Omnipod® hasn't been a problem because I have a very solid sense of self now. You need to be comfortable in your own body before you wear the Omnipod®."

And being tubeless is an added bonus she wasn't anticipating.

"I really do love that there is no tubing," says Asha. "It is freeing. It feels smaller than I expected. It doesn't stick out any farther than my continuous glucose monitor."

"Yes, insulin pumps used to scare me when I was still engaging in my eating disorder. I hope that other people who've been in those same shoes can see that if I'm loving being on an insulin pump, they might love it, too."

© Insulet Corporation. All Rights Reserved.
The author was compensated for this blog.