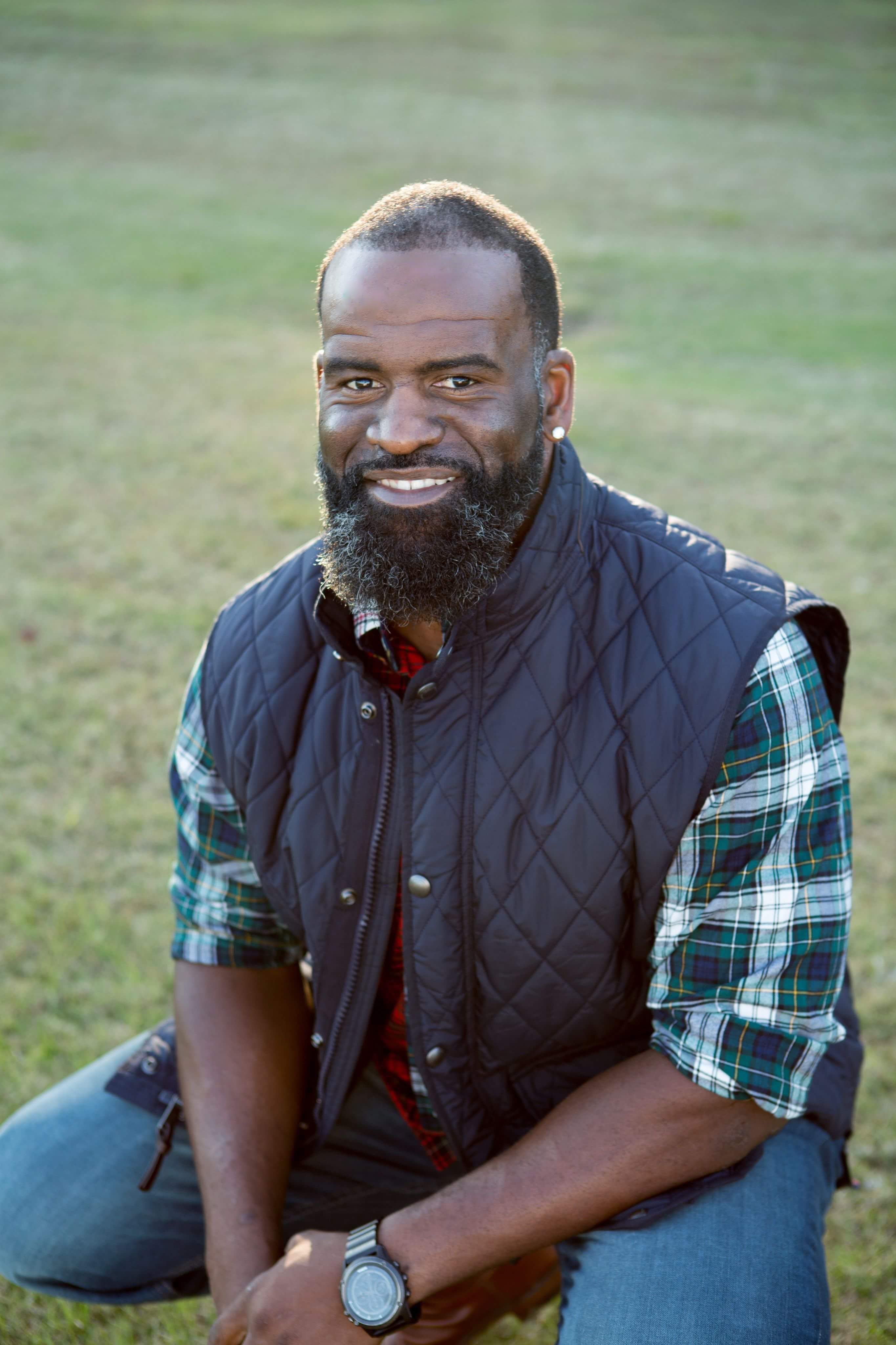 Living with type 1 diabetes comes with a unique badge of life experience that most of those around you will never fully understand. The Pod Squad, on the other hand, knows exactly what it's like to juggle blood sugar levels every day around exercise, food, stress, hormones, work, and life!

Your Omnipod® helps you perform that 24/7 juggling act. One of our very own PoddersTM is the former NFL offensive lineman Kendall Simmons!

Simmons was diagnosed with type 1 diabetes at 23 years old in 2003 at the start of his second season with the Pittsburg Steelers.

Nearly 20 years later and now one of the coaches at Auburn University , Simmons looks back on the 9 years he spent juggling the demands of type 1 diabetes with the demands of his athletic career, wondering what it would have been like if he knew back then what he knows now.

"From the start of entering the locker room until the game was over with, I'd check my blood sugar at least 8 to 10 times," recalls Simmons.

Simmons, his coach, and his healthcare team determined that insulin pumps available in the early 2000s were too large and too likely to be destroyed during a game, so multiple daily injections (MDI) was his best option.

His greatest struggles in managing type 1 diabetes during a game were the adrenaline spike at the start of the game and the crashing lows later on.

"It didn't matter what I did, my blood sugar was gonna go up because of the adrenaline at the start of the game. And I didn't know what it was until a couple of years later because I was so busy and didn't have time to focus on it."

When your body produces adrenaline, this hormone signals to your liver to release stored glucose, and this release can persist for hours -- especially during a professional football game.

"Towards the end of my career in the NFL, I had come up with an approach that helped," says Simmons. "I would carefully bring my blood sugar down to the lower end of my safe goal range before the start of the game knowing my adrenaline spike would eventually send me up over 200 mg/dL."

Trying to correct the highs and prevent the lows often left him on a rollercoaster that he would fight throughout each game.

"I was basically doing experiments on myself," says Simmons, "Learning during every game what did or didn't work. Too much insulin before the game or too much in the last quarter. You have to be your own lab rat and work with your doctor to figure it out."

Teammates Stepped-Up Their Diabetes Support, Too

"Early on in my diagnosis, I didn't know how to handle the emotional rollercoaster of diabetes as well as I do now. My fellow lineman didn't understand firsthand what I was going through but they were still there for me," says Simmons on his years with the Pittsburgh Steelers, where his coach also went to his endocrinology appointments with him.

"As I learned more about the disease, I talked to them about it. Then it was easier for them to spot if I was going low or high and how to help. They would always ask me if it hurt when I took a shot or they couldn't believe I was giving myself a shot like it was nothing."

One of his strongest supporters was Aaron Smith, on the defensive end for the Steelers.

"There were so many times when I tried to fight through practice when I felt awful because of a low or high blood sugar, and he would kick me out of drills until I felt better," recalls Simmons. "When you have one of your peers support you in that way, it really means a lot."

During nationally televised games, diabetes didn't take a backseat, but Simmons' coaches and teammates still had the demands of his diabetes at the forefront of their minds.

"My teammates got me through a lot of those times by noticing the signs -- when I was suddenly completely quiet, staring off into space, hands shaking, slow response to things. They'd get the trainers quickly during TV timeouts."

Today, Simmons knows he could've prevented many of those lows more easily with what he knows now.

"Your blood sugar numbers are like the ticks on a car, redlining. When you get to 180 mg/dL, it's like a car is starting to overheat."

And below 80 mg/dL, of course, means you're running out of gas.

"The less power you got, the harder it will be to perform. My doctor told me it's like playing with one arm tied behind your back. Both your physical and mental capacity is going to be affected. When I was too high, I was forgetting the plays, forgetting the snap count, seeing double vision."

While Simmons knows he did his best with the tools and knowledge available to him back then, he knows the past 20 years of learning through trial and error would have made a tremendous difference in his ability to manage blood sugar levels throughout every aspect of his professional football career.

"It definitely affected the way I played," says Simmons, "I never played one game where I ever felt 100 percent. It affected every aspect of my game mentally and physically."

"When I first tried the Pod years ago, it was bigger and didn't like it," recalls Simmons. "But then I got tired of the tubing with other pumps. The size of the newest Omnipod works great for me."

The Omnipod System gives Simmons the flexibility to live life how he wants to -- and how important it is to never go anywhere with your PDM (personal diabetes manager) that enables you to manage your insulin doses.

"You gotta keep that device with you -- it's more important than your cell phone," he points out. "Diabetes already teaches you a load of responsibility -- you gotta keep up with that PDM."

For Simmons, the transition to using the Omnipod - after years of multiple daily injections as an athlete and eventually using a traditional tubed pump - was easier than he expected.

"I made the decision during one of my rare pump vacations. Going tubeless has saved all my new shorts and pants pockets from cutting holes to run the tubes through them!"

He also appreciates no longer worrying about painful tube snags on doorknobs, seatbelts, and armchairs. And the simple freedoms it offers, like no longer needing to disconnect and reconnect for showering and playing with his children in the pool.

"The built-in glucose monitor and easy-to-read menus and easy navigation is huge plus for me," added Simmons. "Overall, Omnipod has eliminated so many steps from my daily management routine that I honestly haven't noticed until now. I'm glad I made switch."

Staying Active as a Retired Athlete

Today, Simmons also exercises every day by lifting weights and cycling about 75 miles a week.

"It's my stress-reliever," he says.

His Omnipod also helps him stick to a diet that never leaves him feeling deprived.

"I behave myself Monday through Friday," he laughs, "And then on Saturday and Sunday, all bets are off. My wife is a great cook!"

Simmons adds that people with diabetes can eat those occasional fun foods like anybody else, but you have to keep a closer eye on your blood sugar, make adjustments in your dosing, and simply be responsible.

"You don't have to take your refrigerator and throw it in the ocean, you can still enjoy eating!"

"As a coach, father, and husband, the one thing I struggle with the most is mood swings with my low blood sugars," says Simmons. "I don't like how one minute I'm cool and the next minute I'm emotional and I don't know why. Or I'm just irritated and taking it out on everybody else until I catch myself and feel awful, and apologize."

As part of the Pod Squad, Simmons offers 17 years of real-life experience dealing with the demands of type 1 diabetes.

"At first, it's gonna be a little rough. But you gotta give yourself time to learn."

Nobody has to do this alone -- join the Pod Squad to connect with fellow Podders who know what life with diabetes is all about!

The author was compensated for this article.

*The Pod has a waterproof IP28 rating for up to 25 feet for 60 minutes. The PDM is not waterproof.