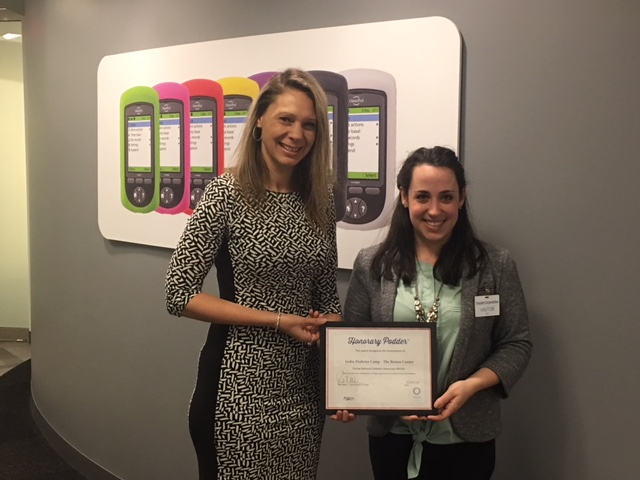 As part of the Third Annual Pod Challenge which took place during National Diabetes Awareness Month, Insulet has donated over $40,000 to 27 charitable organizations supporting people with diabetes.

Throughout the month of November 2017, the Insulet field sales team encouraged Health Care Providers (HCPs) and patients to participate in the Pod Challenge by wearing a non-functioning demo Pod to personally experience the freedom that the Omnipod® Insulin Management System offers people living with insulin-dependent diabetes. For every person who wore a demo Pod, Insulet contributed to a local diabetes charitable organization. In total, 5,056 HCPs and patients participated in the Pod Challenge nationally, raising donations for more than 27 organizations across the United States.

Of all of the various organizations that received a donation, camps that offer care and support to children with diabetes made up a significant portion of the recipients.

“Insulet is happy to support diabetes camps, as they are a valuable resource for families,” said Theresa Parsons, Manager of Advocacy Programs. “Kids not only learn about managing their diabetes, but also have good, wholesome fun and fit in with other kids who are facing similar challenges each day.”

James Smith, Co-Director at Camp Joslin in Charlton, Massachusetts, is the perfect example of a child whose life with diabetes was positively impacted by his camp experience. Having started as a camper at the age of 9, James said Camp Joslin was the first place he didn’t feel like an outsider.

“With type 1 diabetes (T1D), there’s a huge medical component to learn and understand as a child, but a bigger thing that revolves around that is the social aspect.”

James said he was nervous at first, but by the end of his first week he wanted to stay another week. He came back year after year, and when he was old enough to become a counselor, he jumped at the chance because he wanted to help kids going through the same struggles he did at their age.

Now in his first year as Co-Director, James explained that the Insulet donation of $1,500 goes directly to funding camp scholarships, which 50% of campers apply for. He is grateful that Camp Joslin and its sister camp, the Clara Barton Camp, were recipients of this donation to their parent organization, the Barton Centers for Diabetes Education.

Camp Joslin and the Clara Barton Camp aren’t just supportive socially – they also provide diabetes education through “teachable moments.” James explains that their counselors are trained to ask campers for their input when problem-solving or preparing their blood sugar for an upcoming activity. This aspect of the program is not just limited to diabetes management either.

“We take opportunities to highlight problems and solutions, and show kids how to resolve them next time. It helps with understanding diabetes, but also in various other situations with different people from different backgrounds.”

Desiree Joy’s son Aiden (a Podder™) has gone to Camp Joslin for two summers, beginning when he was 9 years old, one year after his initial diagnosis with T1D. Desiree said Aiden instantly bonded with his counselors and he returned from camp more confident and independent in his diabetes management. She credits Camp Joslin and their counselors with making him feel like checking his blood sugar is just like brushing your teeth.

“You can tell they care about the children as most of them were at one point in their shoes. They have such empathy and passion about camp – some of them volunteer their entire summer,” said Desiree.

Another Podder™ 12-year-old Kai Appleton will be attending Camp Joslin for the seventh year this upcoming summer. He began at the age of six, after his HCP team suggested it to his family.

If Kai could live at Camp Joslin, he would,” said Monique Appleton, Kai’s mother. “He is happiest at camp.”

Monique described his first summer there, when Kai nearly refused to leave when she arrived to pick him up at the end of the week. Six years later, last summer, he still ran the other way when her arrival was announced.

“For these kids, who shoulder such responsibility for their daily care, it is truly a gift for them to have a camp where they are not only learning and happy, but more significantly, where their condition is normalized, they are just like everyone else, and they can simply be themselves.  What more could a parent want from a summer camp?”

Down the road at Clara Barton Camp, Christine Anderson’s daughter Alexia attended last summer, in her first year of living with Type 1 Diabetes. Now 9 years old, Christine said that Alexia loved everything that camp had to offer.

“She felt at ease knowing everyone around her was going through the same thing. The various activities and discussion that go on at Clara Barton are amazing.”

Thank you to all of the organizations, patients and HCPs who participated in Insulet’s Third Annual Pod Challenge. You’ve all made a difference in the lives of people with diabetes.

For more information about diabetes camps and to find one in your area, visit the Diabetes and Camping Education Association (DECA).